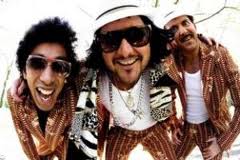 I couldn’t help it, I had to go.  They make it hard for me to resist, those Hermanos Cubanos, when they magnamimously play in my neighbourhood at regular intervals.

After weeks of staying in other people’s houses, and a holiday, I was finally back home with the redecorating nearly complete.  Champagne was in order and D and S celebrated with me.  We weren’t quite sure what D would make of our Cuban friends but a babysitter had been hired, so we knew he was in for the long haul.

The Paradise was buzzing in a bank holiday weekend kind of way – up for it but in a suitably relaxed – here come three days off – manner. More champagne and beers followed.  I got chatting to some people near the stage. ‘Oh yeah, I’ve seen them at Skegness – they were fab’.  ‘Was that Rockness?’ I asked – confused by the plethora of bubbles I was consuming.  ‘No, I can’t remember what it was’.  I turned to someone else:  ‘Have you seen them before?’  ‘Oh, yeah!  I think they’re great – I mean I know I’m a man but I just do’.  ‘It’s okay!’ I said, ‘That‘s the beauty of it!’

Kengo San was on the decks and order was restored to the crazy world we live in.  We shimmied.  ‘They’re five minutes late’ a girl beside me said. ‘They’re supposed to be on at 10.30pm’.  S and I smiled at each other: ‘That never happens – 11pm earliest’.

It was a subtle entrance but suddenly as if by magic Archerio appeared followed by Miguel – resplendent in a neat nautical braided number: It was a tight fit, but he pulled it off.  They joined KS on the decks and then the party really started.

Tunes, rapping, hands in the air, a bit of repartee with the audience but tonight was a crowd that liked their Brothers cool and the music and dancing to the fore –  as always those boys judged it just right and gave them what they wanted:  Old skool, hip and cool, we had it all from James Brown to a surprising Rihanna ‘Only Girl’ – if memory serves. Or was it Pitbull feat somebody? Either way, it was a big jump up and down exhuberant moment and despite Miguel’s protestations at the direction the music was going in – their dancing was inspired.

I looked behind me:  D was grinning from ear to ear and lo and behold, beside him was Will Smith’s son.  ‘How come your Dad let you out tonight?’ I asked.   He laughed and said ‘It’s the corn rows, isn’t it?’ and then leapt onto the stage and showed off his finest funkiest break dancing moves alongside Miguel, KS and Archerio. A huge cheer erupted.

More dancing followed and before we eventually departed, I said hi and goodbye to a charming Kengo San.  He introduced me to ‘Will Smith Junior’, aka JP.  ‘Are you two friends?’ ‘Yeah’ KS replied, ‘I’m teaching him how to breakdance’.

And that’s the thing about those Brothers; they share the love and they keep it real.

As Miguel made his exit he called out ‘Ha’ luego!’ Appropriately so, for Ibiza is fast approaching for Los Cubanos:  24 June at Es Vive requires a partner in crime, yet to be located, but if you find yourself there I’m pretty sure una gran fiesta con cojones awaits  😉