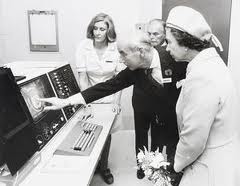 Another Powerpoint presentation:  It certainly still seems to be the predominant method of choice to communicate in any sort of meeting scenario, and I’m always struck by why it hasn’t been superseded by something else.

The content today was more human and consequently more engaging, but nonetheless the bullets and ‘builds’ remained and it wasn’t until we got to the film that I started to get a sense of where I was and what this was really all about.

‘Okay, I’d like you to get into groups and cover these areas – you’ve got ten minutes’ T called out.  We all shuffled around; some people moved.

Flipchart paper and coloured pens were proffered and we started work.  Belle drew a big circle in the middle of the page.  Jen took another sheet and as we were all coming up with ideas she started to draw stick figures: ‘We’ve got to think about how we’re going to present what we do and I think this is the best way’.

Our presentation at the ready, we stood up and told everyone else in the group what we’d come up with.  At the end, after a round of applause, T commented that we’d thought of lots of good stuff, but had we also thought about …….and, went on to cite several things that hadn’t even crossed my mnd.

‘Awesome’ shouted G from across the room: The only boy there, he had made his jolly and enthusiastic presence felt from the beginning.

We all introduced the person next to us and had to reveal an interesting fact about them.  G had just done the biggest bungee jump possible,someone else had just walked from lands end to John O’Groats, about three people said their neighbour had met the Queen/spoken to the Queen/designed something for the Queen. My revealing fact of ‘birdwatching’ suddenly seemed tame by comparison.  I hastily whispered to Katy on my right.  ‘An interesting fact about P is that she’s written three blog posts about the Queen’ she added.

I turned to Belle.  ‘What is that stuff you’re drinking?’ I asked pointing to a large orange bottle. ‘I’m no good in the morning’ she replied, ‘I have to have a redbull or a coffee first thing just to get me out of bed.  This is okay, but I think I’m going to chuck it, it’s lost its fizz’.

The day wore on, more exercises, more exclamations of ‘Awesome’ from across the table.  We went through a list of ‘Dos’ and ‘Don’ts’ and finished up with an activity.  ‘I think we should do Safari as a theme’ instructed one of my new group partners.  ‘I totally agree’ I said, deciding to put any competitive spirit aside and see how that might work.

It worked out fine and I found myself enjoying it.  Late on a Saturday afternoon, we presented back to the room again for the last time.

I looked across at G, he’d been quieter on the ‘Awesome’ front for a couple of hours now: Because actually whilst it is that, and potentially fun –  the fun is serious, very serious and not about us at all.