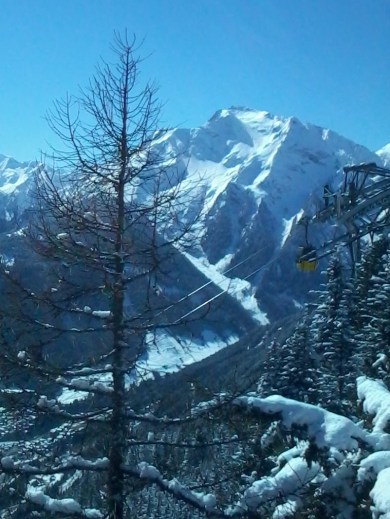 Mayrofen:  The Magaluf of Ski resorts where you can be innocently walking down main street at ten in the evening and a stocious bloke with goggles on saying ‘I love boobies’, will walk up behind you and just head butt your ass.

It’s a heady combination – packs of hairy guys, feral instincts, buckets of Jagermeister and a hefty dollop of Austrian ‘cheese’ – which ultimately saves it from itself.

A combination of too much mountain sun and food poisoning resulted in a day off on Sunday with a trip to the Spa the main highlight – the naked unisex spa that is. Could I do it? I wondered.  I threw caution to the winds, and my towel, and proceeded to try out the various steam and sauna rooms.

By the third room I had made a new Liverpudlian ‘friend’. He told me he was a transformational massage therapist.  ‘How interesting’ I replied as he went on to extol the virtues of skiing: ‘It’s a metaphor for life’.

At dinner I was quizzed on the details and later, bidding each other goodnight, my cousin said: ‘Make sure you get your fat bottom up that mountain tomorrow – no excuses!’

The next day, I paused at the top of the nursery slope trying in vain to close the straps on my ski boots.  ‘Excuse me, can you help me please?’ I said to a large man with a handlebar moustache and a forest under his chin.  He wordlessly bent down to close the two problematic boot straps.  ‘Danke’ I said to an already vanishing back and a swish of his skis; after all with perfect snow conditions and a bright sunny sky there were peaks to be conquered and pistes to be off.

I noticed my cousin waving at me.  I skied down in true beginner style; mostly snowplough but with a bit of a turn here and there.  ‘I’m just going to do this today cuz’ I said.  ‘Well, okay, but why don’t you follow me down this Blue run before we all head off for the day?’ ‘No’ I said.  ‘C’mon, I’ll go really slowly’. ‘NO’ I shouted, in a bit of a panic this time. ‘Okay, well just do this bit with me then’ he replied.  I started to follow him down and as suspected he led me down the Blue anyway, but slowly, in the widest turns possible – zig zagging across.  With just him in my view I couldn’t see the bottom.  I felt safe.  I felt looked after, but more than anything I was touched by the care he took.

At breakfast the following day a Belgian restaurant owner told me he had to take it easy now that he was older on the slopes; if he broke anything he wouldn’t be able to work and he had a family to support.  I told my cousin:  ‘Well if you had that attitude you’d never do anything’.

On the penultimate day, getting braver, I attempted a new Blue.  Two falls later, and a bit shaken up, I headed to the bar for a Gluwein to celebrate my bravery and nurse my wounds.

‘You’ll go up again tomorrow  before you fly back, won’t you?’ said my cousin: ‘It’s important to leave with a good experience to remember’.

At the top of my favourite Blue early next morning, I looked down. It seemed a lot scarier today, but I knew I had to do it.  And I did.