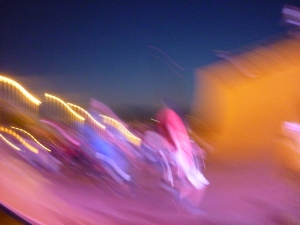 I sat next to some heavily tattooed gentlemen on the beach. They were talking about ‘Gumbo’ or so I thought.  Suddenly it occurred to me. “Excuse me, did you say the Gumball was arriving in San Antonio tonight?”  “Yeah, then they’re driving into town.  There’s going to be a skateboarding park too.”

Hmmm, I thought as I lay back down enjoying the now cooler rays of the days’ sun.  That can only mean one thing: Los Hermanos Cubanos are in town. 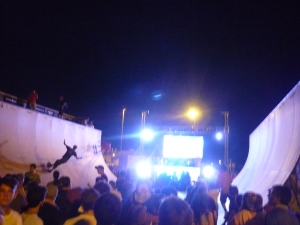 I What’s App’d my host and told him the news.  “Yeah, we thought we’d go down there later, speak to a few people.  Watch Tony Hawk do his stuff.  “Who’s he?” I asked.  “He’s like a world famous skateboarder – been doing it for ages.”  “So what’s he up to here?”  “Good question” said the ever prescient A. “It’s a sort of add-on to the spectacle of the rally – something extra to keep the punters happy.”

My chariot arrived and I picked up my things to head home for dinner with A and T.  “I’m cooking curry” T told me.  “Ah, unfortunately that won’t wash with my braces – I mean literally; the colour of the curry powder turns them yellow”.  “No problem, we’ll have a curry without curry!”

One fine dinner later and we were back in the Ford Transit – or Betty as she’s fondly known – headed to the hottest ticket in town, and some might say even further afield.

The beats were loud – drawing us in.  But there was another noise – the revving of expensive engines.  I heard a voice – could it be..?  Yep, sure enough I saw the back of an afro, some Hawaiian shorts.. and even Archerio – maybe not even two weeks after becoming a Dad.

“We can’t stop S, I want to get up to the skate park and see Tony.”  So we carried on, through the crowds in the port past one after another gas guzzling souped up beast of a vehicle masquerading as a car.

The irony of the massive Greenpeace boat moored to one side wasn’t lost on anyone least of all T.  “But that’s the thing about here – it’s an island.  Everyone has to get by so there’s a myriad of interests expressed – leave your ethics at the door” I said.

We headed back to Betty.  There she was head and shoulders above all the other cars in the place.  “I might come with you to see the Chicken Fajita Brothers on Friday” T smiled.  That was a green light.

We walked in the door, and he took his shirt off.  “See, he’s getting ready for the pool party already” A said. 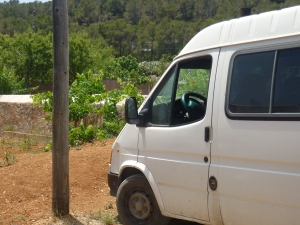