T and I approached the venue.  The music was thumping and I wondered if we were in the wrong place.  The pictures of this beach club looked so nice – so sexy; lots of people lounging casually by the pool drinking buckets of champagne with the sun shining down upon them.

If Pinky was there he would have said ‘What fresh hell is this?’ as we walked in and tried to make our way through a seething mass of semi naked bodies. Never mind, we’re adventurous types and with one Caipiroska down we started to move to the music.

Kengo ‘the bastard’ as he’s fondly known, hopped on the decks and suddenly everyone woke up.

I looked at a tall sultry looking figure standing beside him. He seemed like the new boy, suited and booted, a little shy and slightly ill at ease – Domenico’s been around for a few months now, but I’d yet to witness him in the flesh as it were.

The dancing started.  Archerio, a Dad for just 11 days now took to the floor with Kengo San as the new boy looked on.  “There’s just something about him..” I said to T.

Miguel officially introduced Domenico.  He somersaulted out to join them and then breakdanced in the most graceful manner I’d ever seen. Tall and lean with an incongruous sort of Made in Chelsea look, his body seemed to be made of rubber. 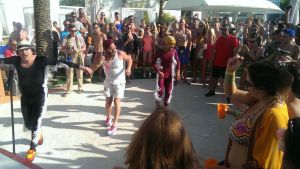 After the performance I asked Archerio where they’d met him.  “At a dance off” he replied. “We were so impressed we asked him to join us. He’s only 19! He does this amazing thing with his legs where he makes them a dead weight and then just spins around.”

We will Domenico, we will – and we like how you fit.