I can always tell when my cousin is on the school run.  Apart from the time itself – around 4.45pm – the bellowing wind enveloping her usually causes a shouting match as she marches up the hill towards her son’s place of learning.

Me:  “RACH!  LOVELY HJORDIS FROM IBIZA HAS SENT AN INVITATION TO WHAT LOOKS LIKE A PROPER OLD SKOOL DISCO NIGHT.  IT’S CALLED THE RETURN OF JEZEBEL HOSTED BY BODY AND SOUL – A CHARITY – AND JADE JAGGER.”

Rach: (even louder than me):  THAT SOUNDS NICE!  COUNT ME IN!

Tickets were booked and 11.15pm on Friday found us getting out of a cab passing the waiting paps to enter Loft Studios, NW10. Jeans and trainers were de rigeur and the only difference I could see between this and a Warehouse party from back in the day was the lack of black army surplus flying jackets.  The rest was intact:  gritty floor, bare brick walls ‘vandalised’ with graffiti art, a bar serving beer and wine with a 21st Century nod to a couple of cocktails.

We took a look at what was up for auction chatting to Paula – manning the stand.  I slung a Rolling Stones T-shirt on and flung Kate’s (Mossy) leather jacket over the top.  “Fits like a glove!” I exclaimed.

Paula laughed.  “Yeah, the jacket’s cool – it’s got a nice picture of a wolf on the back, and it’s signed by Kate.”

Rima and Emma from Body and Soul appeared.  “You have to get them – they look fab!”  I glanced around me – uncertain as  to who else was buying stuff – but it was all in a good cause.

“I’ll get the T-shirt” I said, “That’s more my budget. Do you think Jade would agree to a photograph?”

Rima left to find her. Paula winked at me: “The Tee comes from Mick’s own private memorabilia collection – he sent it over from his home in New York on Monday.”

“Touched by his own fair hands!” I exclaimed to Rach.

I asked Ms Jagger why she’d become involved with this particular charity.  Her look immediately changed from party smiles to absolute sincerity.  “I’ve known about HIV from an early age, and there’s always been this stigma…”

“No, not like in the 80’s” she replied.  “But I was drawn to what Body and Soul do in terms of providing support – for children especially – up to adults who are affected by it.” 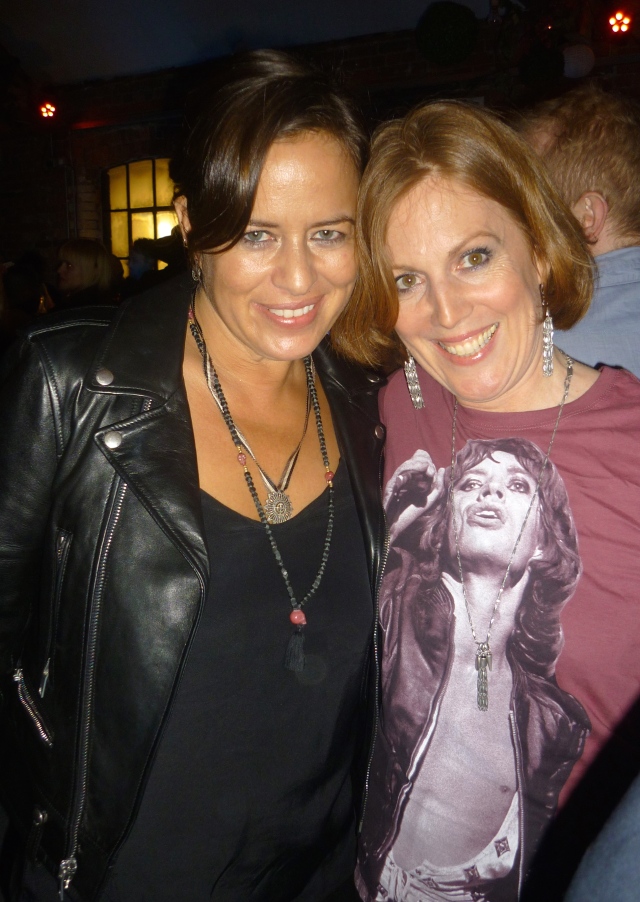 Rach, my gorgeous cuz papped away and I was loving the daughter/father combo image that resulted.

The bass was getting chunkier, making it hard to resist the dancefloor.  “Let’s ditch the heels and get our trainers on” I suggested.