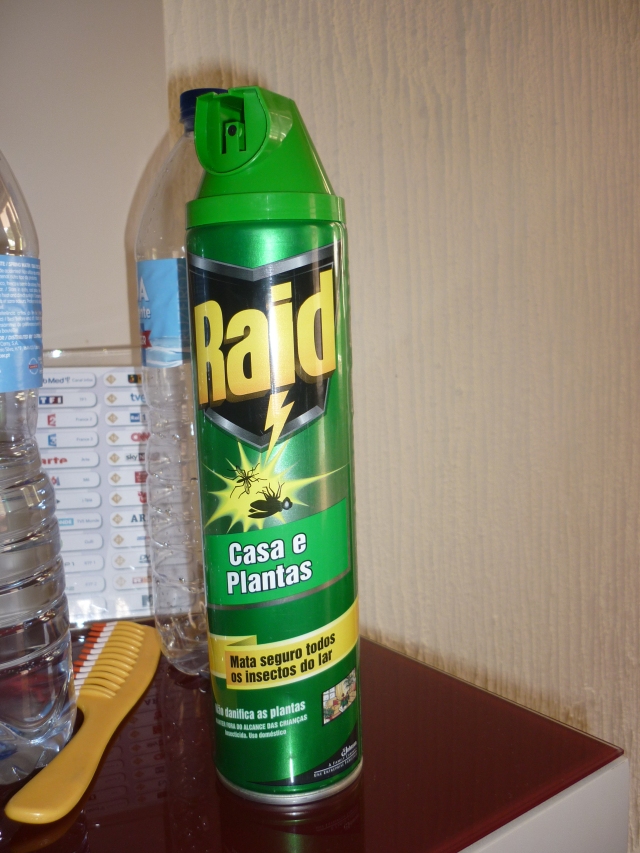 “Look, Karen, if you’d like a can of ‘Raid’, Housekeeping dropped one off for me this morning” I mentioned to one of my new holiday companions from Buffalo, New York.
“Oh sure, I really hope we’re not gonna need that though.” she replied.

I told her I hadn’t meditated that morning because I was afraid to close my eyes in the room. “I think that’s what went wrong today” I said.
“You think?!” She replied.  “You sure it wasn’t that large insect you found in your bathroom last night?”

The day had been random with a jeu pre lunch at La Piscine, which involved trying to pitch a ball into a round shaped object in the pool with a golf club from the side.

Serge – the Chef de Sports – asked me what the inflatable ring was called.  “You’re English – you should know!”
“Irish, actually” I replied. I couldn’t for the life of me think of it.  A life raft? No, that was daft.  I asked my new New Yorker friend.
“Yeah, it’s a life preserver. That’s what it’s called.”

The game fizzled out rather, and I suggested to Karen it could be termed a damp squib.
“What?! What does that mean?!”
I explained it to her.
“I love it!  Seems like a lot of things in life are a damp squib though” she replied.

Pre dinner Crazy Signs were planned but on arriving at the bar – inside tonight due to a force ten gale blowing outside – we were treated to some solo singing instead.  Never mind, there was always a Lemon Drop, served up nice and tart by Valente – a benign stalwart of this particular Club Med village for many years.

After a succulent dinner we went up to the bar again.  It was casino night.  “What do you think the prizes are?” I asked, as we watched a G.O. manning a long table with what looked like small furry animals being raced along the tracks within.
“There aren’t any!”  Karen cried.
We checked out the chips being cashed in but couldn’t make out what they were being exchanged for.
“Is that another damp squib?” Karen asked me.

It came back to me in the middle of the night and the next day I went to find Serge.  “It’s called a lifebelt – that round inflatable ring in the pool” I said.
“Yeah, exactly” Karen joined in, “A life preserver, that’s what I said!”