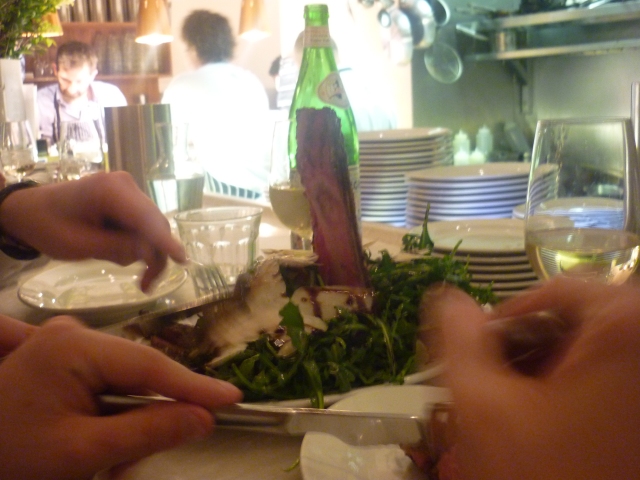 “I’m going to seat you up at the bar” the manager said when I booked Bocca di Lupo. “I think you’ll like it, you’re overlooking the kitchen and there’s always a bit of drama going on.”

A and I met at 8pm and took our places. High stools at a high bar in front of which we could see grills, deep fat fryers, cooking on gas and four intensely focused chefs. One in particular caught my eye. He never looked up not even when he was called to produce another rack of lamb and mountain of rocket. Just a ‘Yes Chef!’ and the sound of a hatchet striking bone followed.

We made our way through course after course of Italian delicacies and got chatting to the two white-shirted adonis’ sitting next to us. One of them, Serge, turned to us: “So where are you going tonight?” he asked.
A and I looked at each other and I clocked the time. Should I say it was already an hour past my bedtime or would that ruin the mood?
“Um, not sure. What about you?” I asked. “Where do you usually go?”
“Maybe ‘Scotch’ in Marylebone – that’s my local. Depends on my mood really” he said, checking both his Blackberry and i Phone laid out on the counter in front of him.
I spotted a conversation in motion. “Do you use Snapchat?” I asked.
“Not so much, but I used to. What about you?”
I said ‘no.’
“That’s a shame” he said holding my gaze for just a couple of seconds longer than usual.

Still, our steely blue-eyed chef was eyes down.

I turned to Serge, told him about my new blog and offered him a business card. “I can’t wait for it to launch” he said dryly. I felt eyes upon us as he took the card and put it in his wallet.

Glancing around I saw Steely Blue look away quickly whilst putting the finishing touches to a very large T-bone steak.

I reached for my camera. “I need to get a shot of this.” I said to A.
“Don’t worry” said our elusive chef, meeting my eyes directly for the first time. “It’s coming right next to you.”

Sure enough Serge and his companion were to share it. All raw pink meat, A commented it was just the thing to get them fired up for trading on Monday.

I took a photo. This time, a split second glance and the glimmer of a smile.