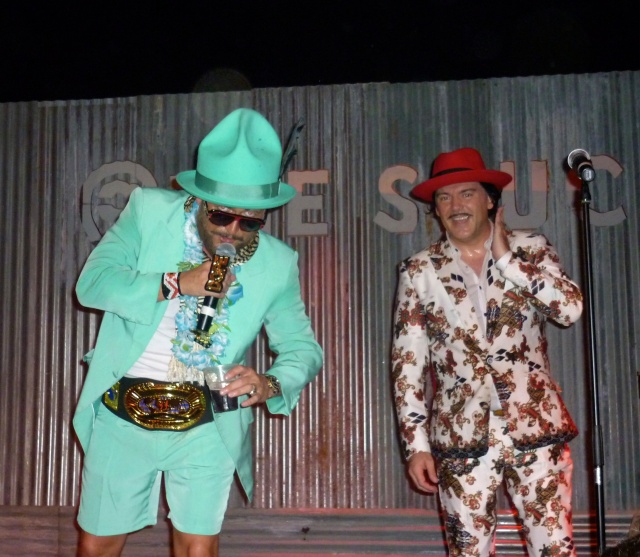 “I think they were the best I’ve ever seen them tonight” E shouted as we dashed through a force ten gale following The Cuban Brothers’ gig at The Shuck, Whitstable.

Soaked through we arrived at the car.  I shook raindrops from my hair and shut the door quickly.  “I may have to agree, and Lord knows I’ve seen them enough times: I can only put it down to the new aquamarine suit and the hometown combo.” I replied.

Ah, aquamarine, my favourite colour and when worn by one of the inimitable Cubans – local to this part of the woods – a tough act to follow.

We’d arrived at 8pm, out of town hours, earlier than usual.  “Everything’s usually winding down by 11pm here” said my Whitstablian friend E.  “I reckon they’ll be on at 8.30pm.” “9” I wagered.

We ate fish and chips to a thumping beat in this shack-like marquee inspired seaside venue.  So seaside, I felt like we were floating on it – perhaps we were?  It was hard to tell in the torrential rain that had followed us all the way dfl (down from London) and was showing no signs of abating.

“Whitstable, eet’s good to see you!” Miguel shouted, boxer belt adorned, sporting his new fetchingly coloured suit and a Pharrell style hat which resulted in him looking like a rather fashionable Leprechaun – albeit a tall one.

“Jesus Christ!” Miguel shouted, “Eets like hurricane Katrina out there tonight frens – look at the sea!! Look at eet, eets reminding me of something… something like Titanic.” 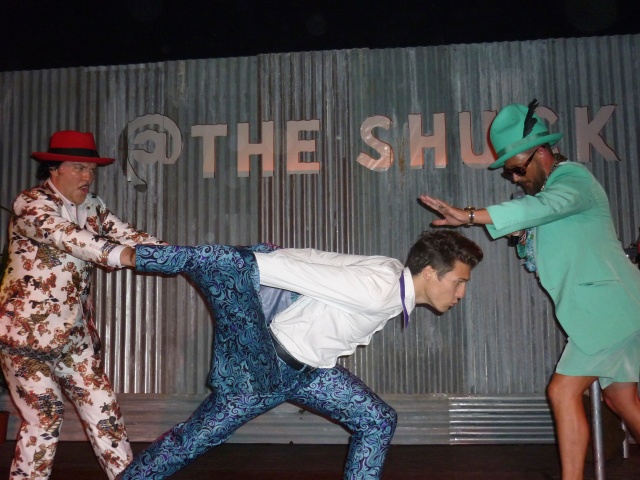 Juan Erection entered, sideways and backwards somersaulting his way into greatness to gasps of amazement.

Miguel started the bidding.  “Ladeez, do I have £500 for him?  Yes? Okay.  Oh, over here – £700!  Now, £1,000! He is fast ladeez, verrrrry fast… he will be pumping …and pumping.. Allow it!” It was classic Miguel.  The bidding rose to £2,000 and the lucky lady received a chaste kiss from Juan Erection. He swept magnificent hair back from his magnificent forehead and savoured the moment.

Kengo roller skated and DJ’d his fine purple ass off.  Miguel discussed Archerio’s long-term diet plan. The finale had all four together, joined at the hip – so joined it seemed they were as one, their performance seamless.

Later on at a sensible bedtime hour we perused the photos.  “You took a lot of that suit, S” E commented.
“Yeah, I know” I agreed.  “But, there was just something about it .. ”

For more photos of The Cuban Brothers at The Shuck, Whitstable see ‘Conversationswith Strangers’ on Facebook