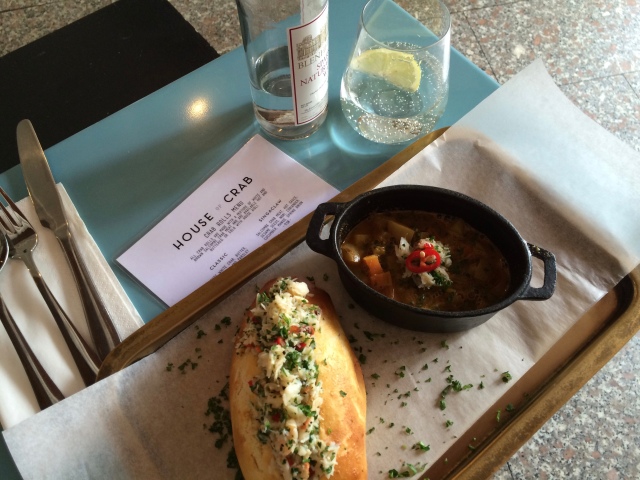 When you’re in the West End of London town and feeling peckish at lunchtime, it’s hard to escape the pull of the ubiquitous fast food chains for a re-fuel: Mayfair, home of the £20 cocktail is especially challenging.

Crossing New Bond Street through streams of Bentleys and revving Maseratis I sought sustenance and respite from the main drag. On Grosvenor Street I spied a couple of brightly painted tables and chairs sitting outside a cute wooden facade.  An entrance gaily thrown open to the street dared me to walk past without investigating.

I walked in to more cheery furniture and a whitewashed bar at the back, behind which a young bearded man industriously attended to business.

“Are you a pop-up?” I asked, “Specialising in Crab by any chance?”

He grinned and gave me the lowdown.  Open since early this year they are indeed that, and plan on staying in Mayfair for the duration of 2016, business depending. “Sit down! Sit down!” he insisted handing me a menu.

I like a simple menu. Sometimes the less on one the better:  There’s enough choice in life, why not keep it minimal especially at lunch when time is often a constraint?

Tastes of the sea beckoned.  Gentle jazz played in the background, the tinkle of glasses, a beer being opened then poured and the friendliness of a new business all served to make me feel like I was in a beachside shack in Cornwall: Outside nothing but the sea and sand, people enjoying a summer lunch, kids running about with buckets and spades.

I ordered the classic crab roll.  Freshness in white meat, the kick of lime and coriander, a little crunch in the radish nestled perfectly in a melt-in-the-mouth bun.  “Is this a brioche” I asked the chef.
“Yes, we make them ourselves.  I brought you up a taster of our chowder too – thought you might like to try it?”

I scooped up a spoonful: A Manhattan base proved a light compliment to the crustacean.
“But have you thought about making this into a gazpacho for the summer?” I asked.  “Something more refreshing, cooling, just the thing for our British heatwaves?!”
He laughed.  “It’s a good idea” he said and disappeared downstairs only to appear 15 minutes later with some in a glass.
“Try this”  he offered. “I just whizzed it up.”

I sipped. “Needs a bit more lime I think”
Steve tasted some too. “Yep, that’s it.” And, he was off again, fervent in action, passionate in purpose: Quintessentially pop-up. 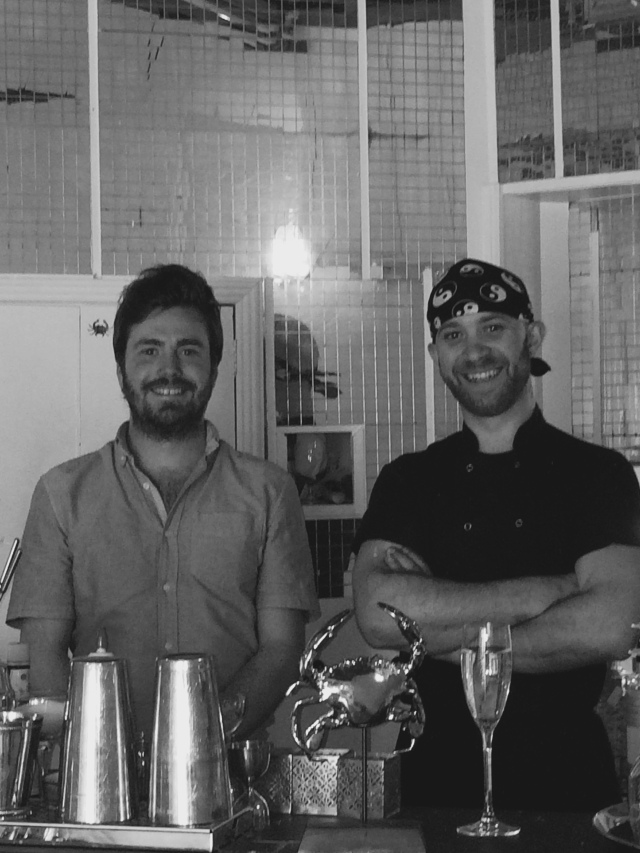