What do the Olympics and Pokemon have in common?  Well, not much really except that they’re both topical and highly competitive.  So, when my suggestion to join my ‘nephew’ and his Mum at the Olympic park to hunt Pokemon was met by a youthful ‘Yeah okay’ that was enough encouragement.

I did the downloading and arrived at the beautifully landscaped venue of so many inspiring memories from 2012.  Alliums and long tall grasses gently swayed in the breeze, a blazing sun bounced off the River Lea and cyclists rode slowly past curvaceous benches, enjoying the sense of freedom and space afforded.

J came running towards me: “You need a name! Have you got one yet?”
“No – any bright ideas?”
We stood by the aquatic centre looking up at curves side-framing a blue sky.
“I don’t know – Helexium?”
“Whatever you say, you’re the expert.”

I punched in my virtual self’s new name, added a few numbers and I was off.

My first Pokemon appeared floating in front of me, hovering just above the grass.  I tried to zap him with the ball but to no avail.
“Here let me do it for you” J said grabbing the phone. “Gotcha! You got a Staryu, I’ll power it up, it’s only CP 11 though..”

The novelty wore off after my first few targets were met, but all around us kids and adults alike walked, head down, phone focused, intent on their next victory. 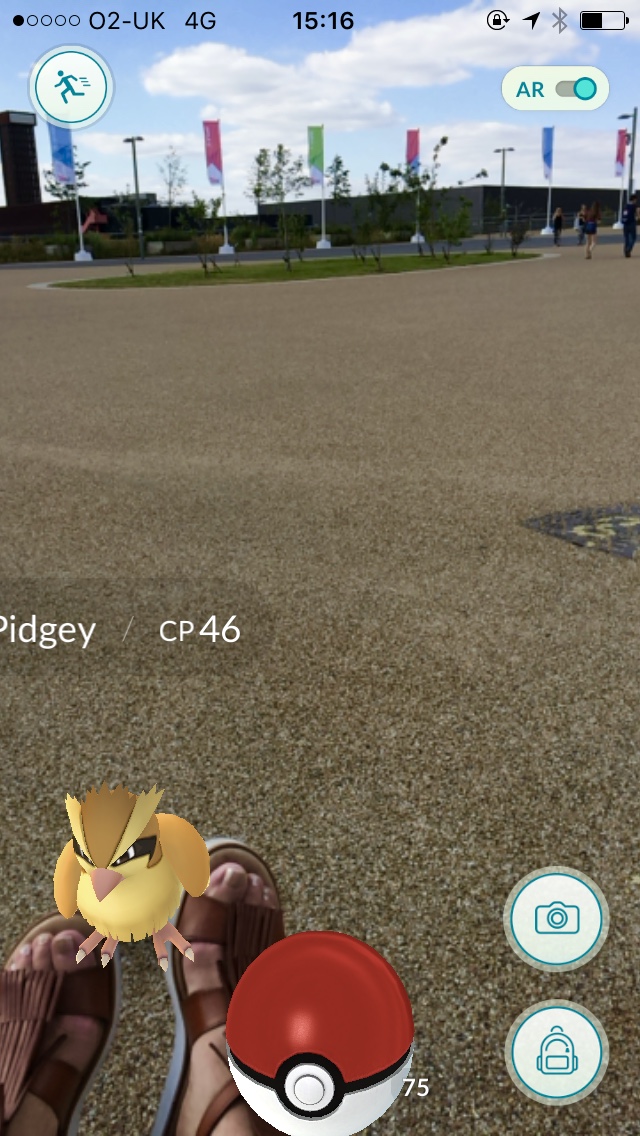 We rested for a while on a deep wooden bench. I pointed the phone at my feet. A Pidgey appeared, I zapped him and reported my success.
“What level you on now?” came the by now regular question closely followed by “What CP was that?”
“Still four” I said “Um CP 46?”
‘Th!!” and “Rubbish” was his response.

A sunny tea and cake break followed.  By now my phone lead was in J’s hand and attached to his battery pack.

We passed a sign that read ‘PUSH FOR THE FINISH’.
“You’re doing well!” I was told at one point with a shy smile and an arm around my shoulders.
“Yeah not bad considering I’m not even remotely into it, J.”

Next day on the bus home, I checked in. The Pokemon came thick and plentifully.  A message flashed up: ’You’re travelling too fast! Are you a passenger?’ Helexium looked confused, going from one direction to another and back again.

All of a sudden a Slowbro appeared on screen: CP 90. I swiped the ball rapidly and repeatedly, but no joy.  ‘Slowbro got away!’ my phone told me.

I texted the news to J. The response was immediate; while impressed by the rare find ‘Where?!!’ was his inevitable Pokemon response.