The twin prop aircraft landed at Sumburgh airport. I picked my bag from a selection of three on the tarmac and wheeled it towards the terminal, following a group of fresh-faced locals and international adventurers. Breathable air and blue skies lifted my weary 6am start to the here and now.

“I’ve heard there are dolphins” I said to the obliging gentleman at the tourism desk inside.
“Ach, you’ll no see them, but you might see some Orcas if you’re lucky. If you see a crowd stopped at the side of the road, stop too, it may mean there’s been a sighting.  Listen to the local radio at night for an update on where they are.” I thanked him and asked.  “What about the puffins?”
“Ay, you’ll spot them at Sumburgh lighthouse – there’s a nice cafe there too, they do very good cake.”

A hearty bowl of homemade soup later, my friend appeared to whisk us off to the southern most tip of the mainland.

We stepped out of the car to a view that seemed dreamlike; sea and sky merging to create a misty horizon barely visible, tantalisingly ethereal. Upright pink Spring flowers scattered the vibrant green grass providing a pretty frame for jagged cliffs and rocks beyond. Guillemot’s and seagull’s cries provided the background music. An orange webbed foot vanished into a burrow below.

Sticky ginger cake was the precursor to a dinner that evening of fresh pan-fried Shetland scallops from Frankie’s. We savoured them in the silence and stillness of a small wooden cottage moments away from the seaweed-strewn Atlantic’s edge.

At 11pm that night the sky was 7pm London-bright. I went for a walk on the beach to sounds of gentle waves rolling in to shore and washing back out to ripple a sunset slowly causing the sea to blush.

Continued fine weather the next day facilitated a three-hour cycle ride to Eshaness Head: Off the bike and on the bike, willingly held ransom to the hills and stupendous views at every turn.  Shetland’s sheep, lambs and ponies looked up from grazing as I passed; seabirds swooped low, hunting and curious to see another form of life on their turf. 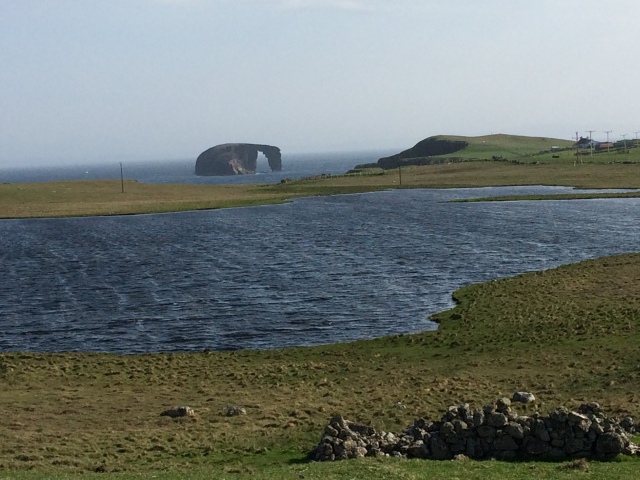 A view of the ‘drinking horse’ at Stenness had me wandering off the road to take pictures: Handsome and magnetic, a stoic reminder of the power of nature.

By Monday a weekend of local music and merriment to celebrate the restoration of Hillswick’s old weaving shed had been enjoyed. Another trip to Sumburgh Head with a group of newly made friends coaxed the puffins to appear.

I looked beyond the cliff edge and out to the horizon. The Orcas had not appeared yet: They could tell this was just the beginning; a taster to touch the heart, a return visit inevitable to witness further splendour.

2 thoughts on “All Kinds of Everything”