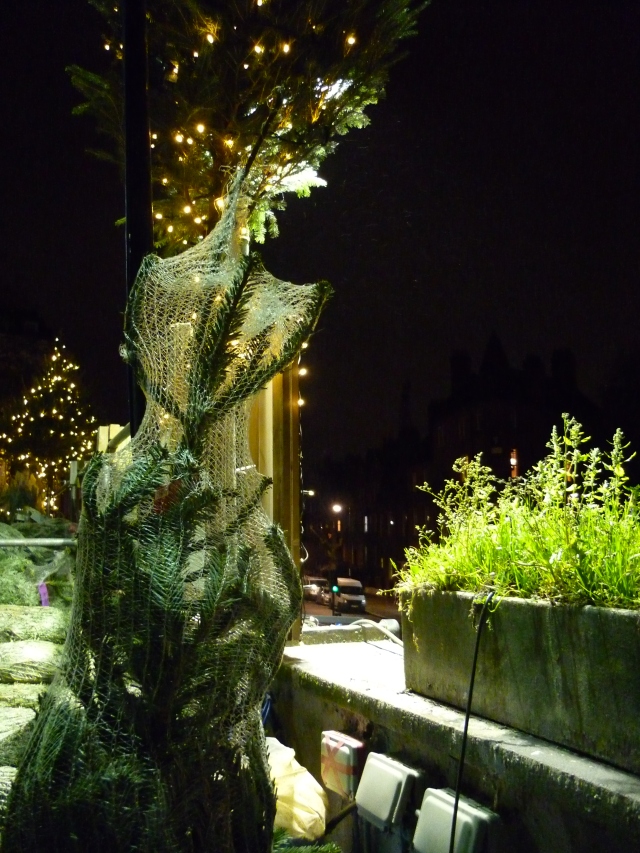 I can’t help it, West London brings out the capitals in CWS: It’s the second time in almost as many weeks I’ve had to do this with a title. But then Pines and Needles is yet another example of this part of the world keeping it real – and in the family as it were.

Most of the year on the corner of Shirland road a stalwart of a dry cleaners can be found, but in December something magical happens.  A vertitable forest of fragrant pine trees appear, men in kilts run about the place – up and down ladders, hoisting trees over their shoulders, carrying them from the rooftop storage, and purveying them to anyone with the romance of a traditional Christmas still in their hearts.

Over the past twenty years the business has grown and a wooden Tyrolean type hut now stands firmly amongst the green finery, lights twinkling away, tunes coming from within.

A Nordmann Fir in hand, I glanced over the counter.  A red kilt appeared wearing a Santa hat. ‘It’s beginning to look a lot like Christmas’ came the dulcet tones of my favourite Canadian crooner from amongst the baubles and poinsettia.
“Someone’s nicked my Michael Buble Christmas album” I said to the young fresh faced boy who looked up.
“I wish someone would nick ours” he said drily.
“Ah!  But you don’t really mean that” I smiled.

We talked mountains and forests while another of the Pines and Needles crew joined us: John, an old friend of the family filled me in.  “The trees all come from Sam and Josh’s father’s farm in Perthshire, Scotland – it’s beautiful up there – and for every one we cut, we plant three more” he told me. Ethical music to my ears.

I lowered my nose to breathe in the scent of my lovely new Spruce. Pine freshness brought me back to my old home in the Irish countryside; frosty mornings leading into dark afternoons. Returning home from a late walk over the fields to a tall tree freshly cut, waiting for me to decorate it on Christmas Eve. A crackling fire accompanying the unwrapping of time worn decorations, checking the lights, sellotaping snowman-clad gift wrap paper around a bucket. The smell of earth and nature. The nostalgia of one’s roots.

Alex kindly carried the bundle of joy back to my flat. “Make sure you keep water in the stand” he told me, “That’ll keep it nice and fresh.”

I tore the netting. Branches fell away gently from her trunk until she stood, 4ft and proud, coming into her own on the eve of Christmas. 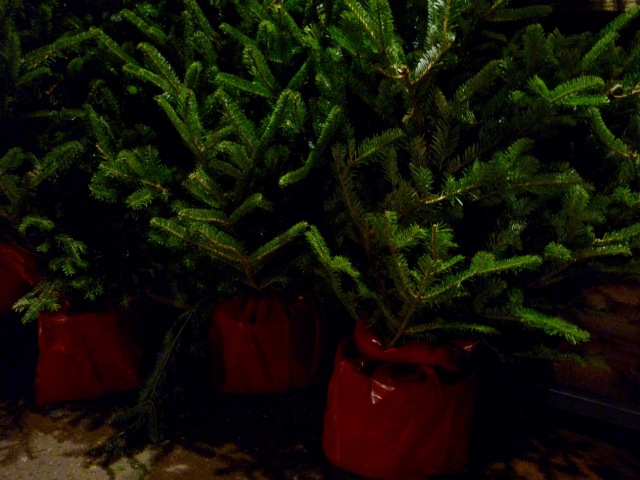